For being on this page and spending your precious time reading all my scribbles.. 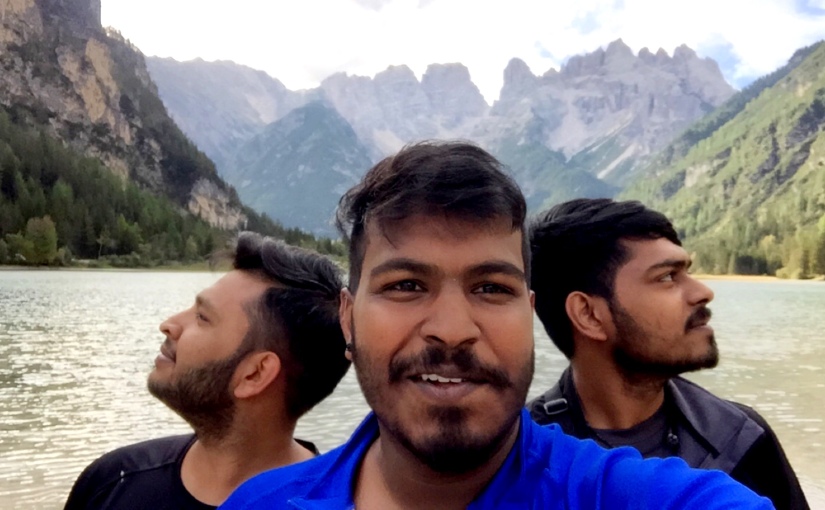 So day four was a bit of a whirlwind. Hilarious experiences were encountered on Day 4. We wanted to avoid toll charges and took a long route and in an hour we were in Italy. As I was driving along I could see some mountain ranges to my left hand side and I was thinking ‘that can’t be the dolomites, it definitely isn’t’. I saw a sign post which clearly indicated that it was indeed the ‘Dolomites’. So being the excited child I was, I drove straight towards the mountain and parked up in a comfortable place. As I was walking on the bay of the lake to take pictures, I completely forgot that the ground wasn’t solid and it was actually ‘clay’. So I slipped and my camera went flying along with many other things and I landed in clay with all my clothes covered in it. So I had to drive for more than 3 hours in a towel to our next destination, which was an experience in itself

So the night before I mentioned a little bit of history to my cousins and they were excited to visit this little bit of history over in Germany. So we decided to drive to the ‘Eagle’s Nest’. As it was a Sunday and it was already late, we got to the tourist centre of Eagles Nest pretty late. The last bus to the top had already left. So the only option was to hike. We decided that we would hike half way at least and take some good pictures before we come back down.

It is also known as the Kehlsteinhaus. It was presented to Adolf Hitler on his 50th birthday as a retreat and place to entertain friends and visiting dignitaries. Today it is open seasonally as a restaurant, beer garden, and tourist site.